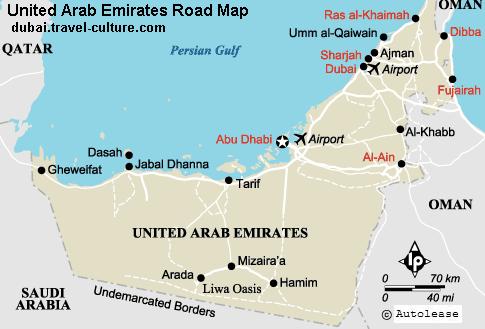 The United Arab Emirates (UAE) is a union of seven sovereign sheikhdoms, formed when the British withdrew from the Gulf in 1971. It boasts mountains, beaches, deserts, oases, camel racing, Bedouin markets and the legendary duty free shopping of Dubai, all packed into a relatively small area.

It also has the most relaxed entry regulations in the region, the best tourist infrastructure and, despite promoting itself exclusively to tourists with a buck or three (or four) to spend, it's extremely accessible to independent budget travellers.

Facts for the Traveler

Visas: British citizens and nationals of most Gulf countries do not require visas; Gulf citizens can stay as long as they want, Britons for up to three months. All other visitors are required to have visas. Your hotel can sponsor you for a 15-day, nonrenewable transit visa or a one-month renewable visit visa. Note that if your passport shows evidence of travel to Israel you will be denied entry to the UAE.
Health risks: Hepatitis
Time Zone: GMT/UTC +4
Dialling Code: 971
Electricity: 220V ,50Hz
Weights & measures: Metric